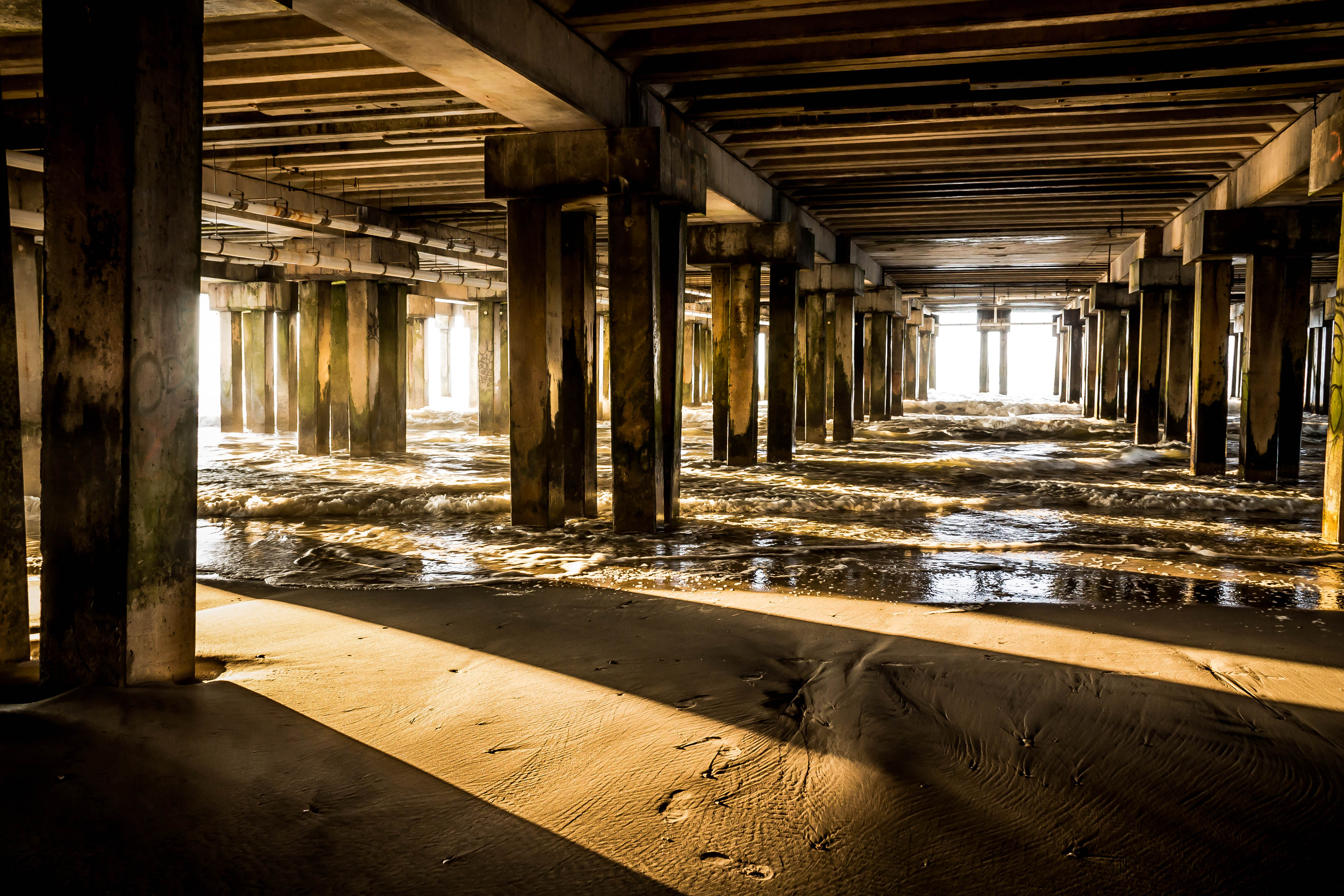 As I’m entering my second year of photography as a guilty-pleasure hobby (and my friends are starting to become unwilling subjects at various locations), I’m constantly drawn back to the first photograph I took which had blown me away. With a new DSLR and a new hobby, I found myself naturally comparing myself to others’ work. Other professional photographers on Flickr and other photography websites post such incredible images which I could only hope to achieve and emulate in this lifetime. I, on the other hand, have only taken mediocre and dull images around my neighborhood which impress nobody except my mother, who thinks any photo I take is a good photo. However, one day in September 2014, it finally happened. I found some inspiration and snapped a photo which, in retrospect, is one that compares to the greats to which I compared my work on a daily basis.

Let me set the scene for you.

My wife and I spent a night in Atlantic City in September 2014.  We typically go every few months or so and spend the night at our comped room at the Trop. This night was no different. We had some drinks and gambled a bit on the casino floor.  We had a delicious Carmine’s dinner and we were generally celebrating life together. We called it quits and went to bed around midnight, as we are not as young as we used to be. We watched some Jimmy Fallon on the Tonight Show as we dozed off to sleep with our stomachs full and hearts happy.

Since I am an English teacher by day, I am perpetually on teacher time. This means that I cannot sleep in past 6am. Naturally, I woke up around 6am and I could not fall back asleep. I knew my wife could sleep in for a few more hours, and I saw the first subtle rays of sunshine peaking out over the Atlantic from our room, so I decided to hit the beach with my camera as the sun began to rise. 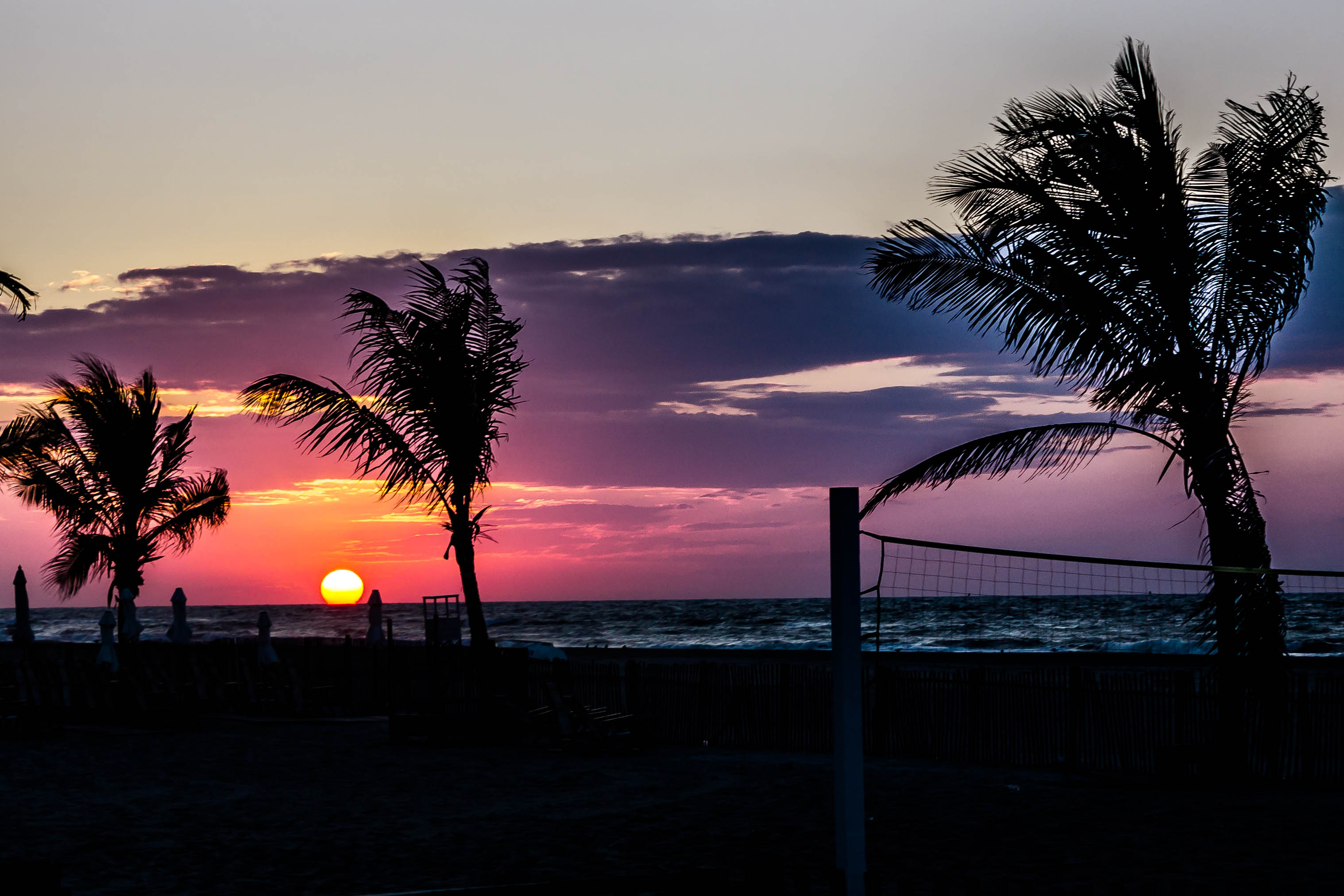 It was a warm and calm morning, and it was the first time I really set out to capture a sunrise over the ocean. I took the above photo as I left the hotel and was hurrying down towards the waterline. It was one of my first photos of the morning and I was inspired by the beautiful colors in the sky. I liked the vibe that the trees added to the photo as their silhouettes stand proudly across the image. In editing, I don’t remember what I did (as I was still learning to navigate Lightroom at the time), but I know I immediately don’t like how the background lightens up behind the trees’ leaves. I find it distracting. But anyway, back to the day. 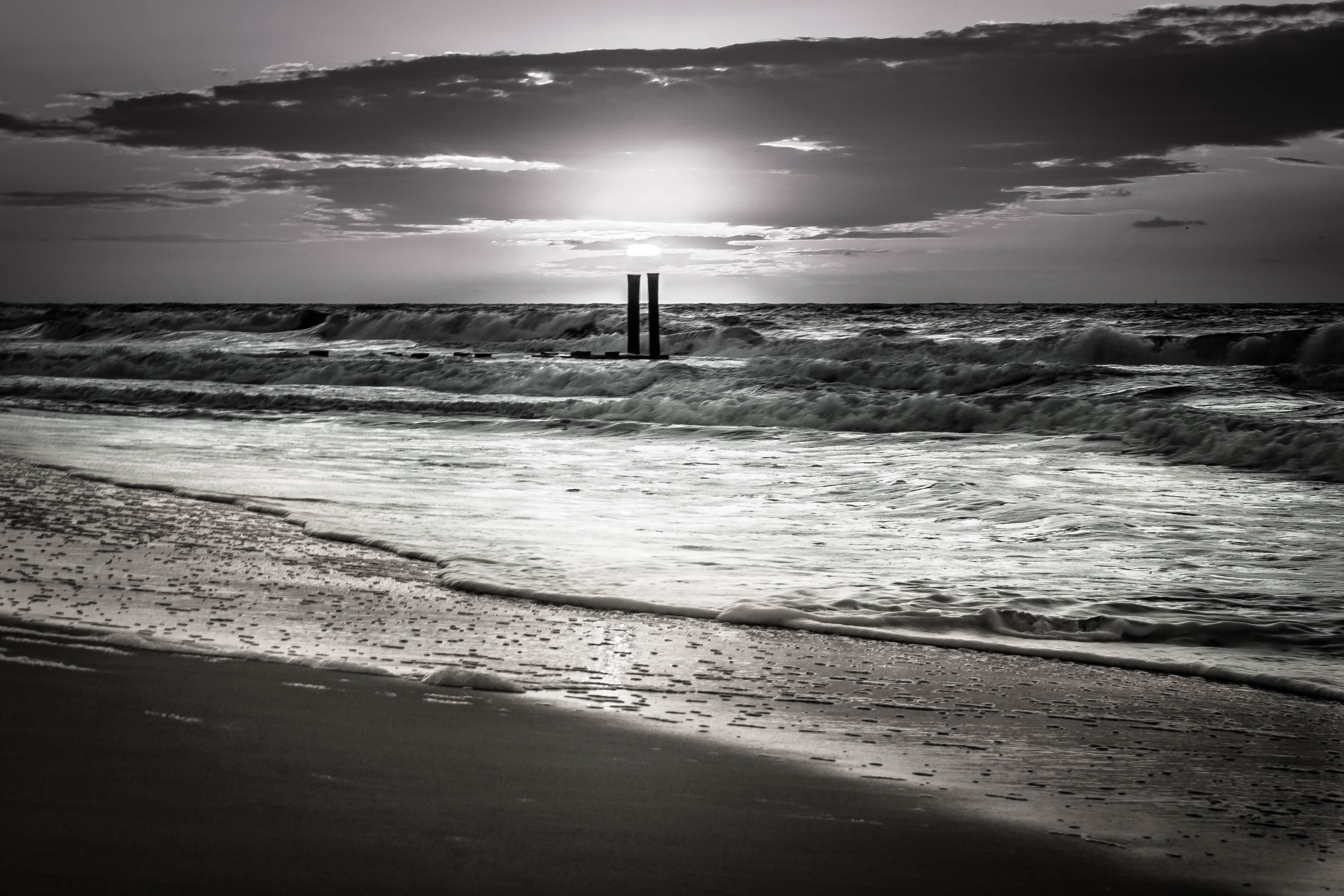 I played around with some angles, framing, forced perspective, and new ideas as the sun steadily rose over the horizon, dipping in and out of clouds. 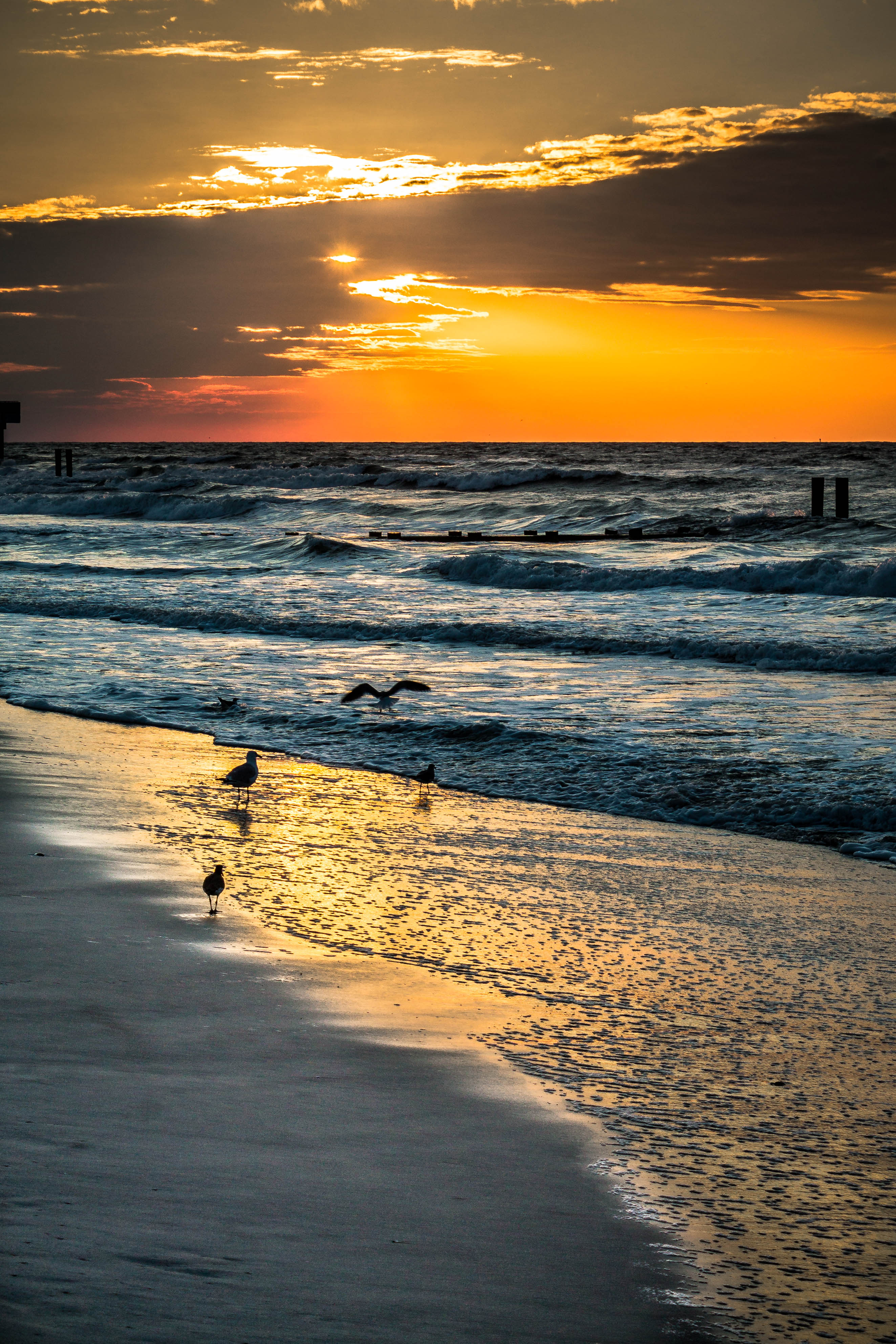 For the above photo, I made the attempt to include the seagulls in the shot in order to help add some dynamics and character to the photo. 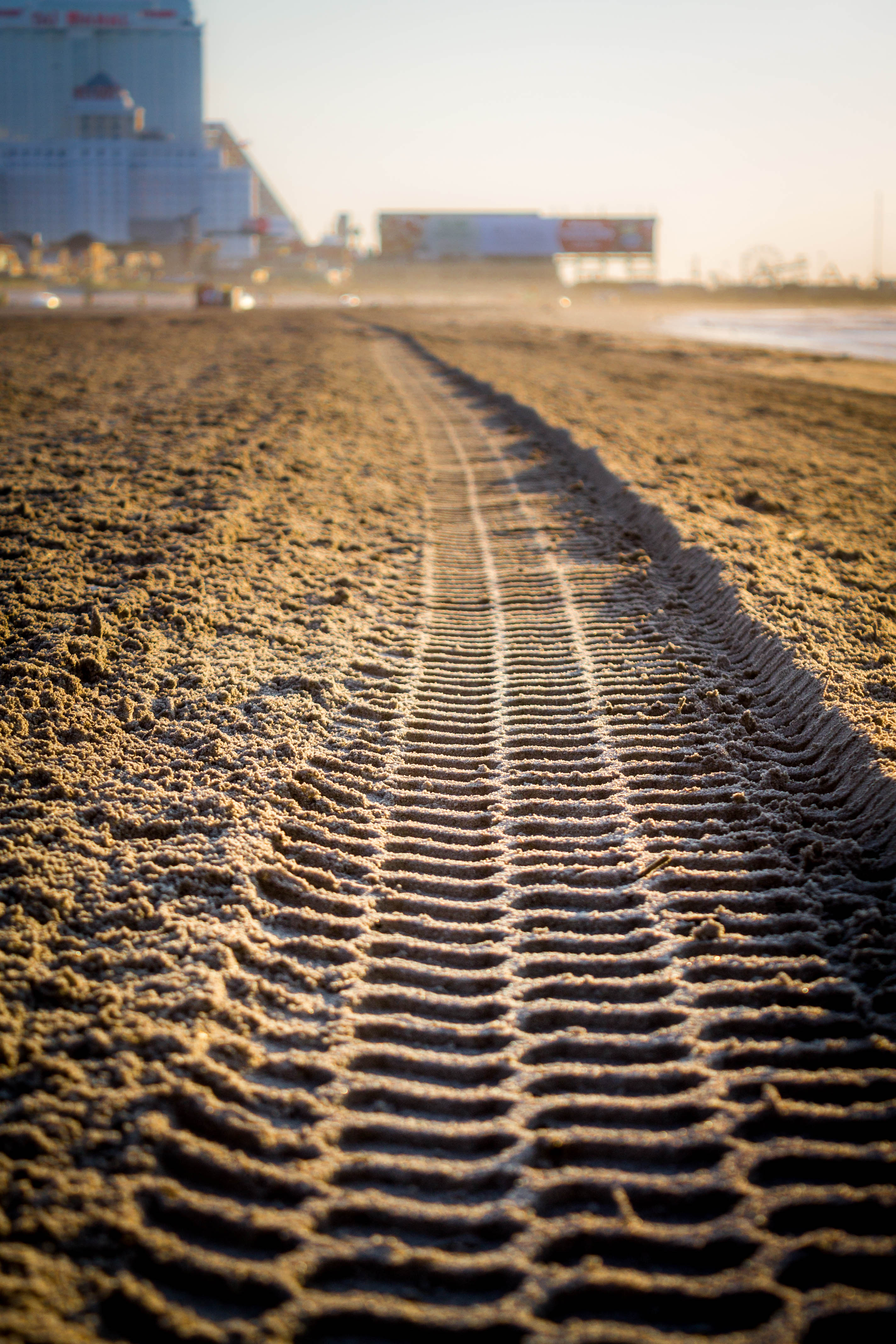 I’ve read on many a photography website that when you’re fixated on one idea, you may miss the bigger picture and other details, so I forced myself to look away from this sunrise in order to find some other small details from the morning. Here’s one that stood out to me. The tire tracks are a stark contrast to the naturalism of the beach and sunrise. 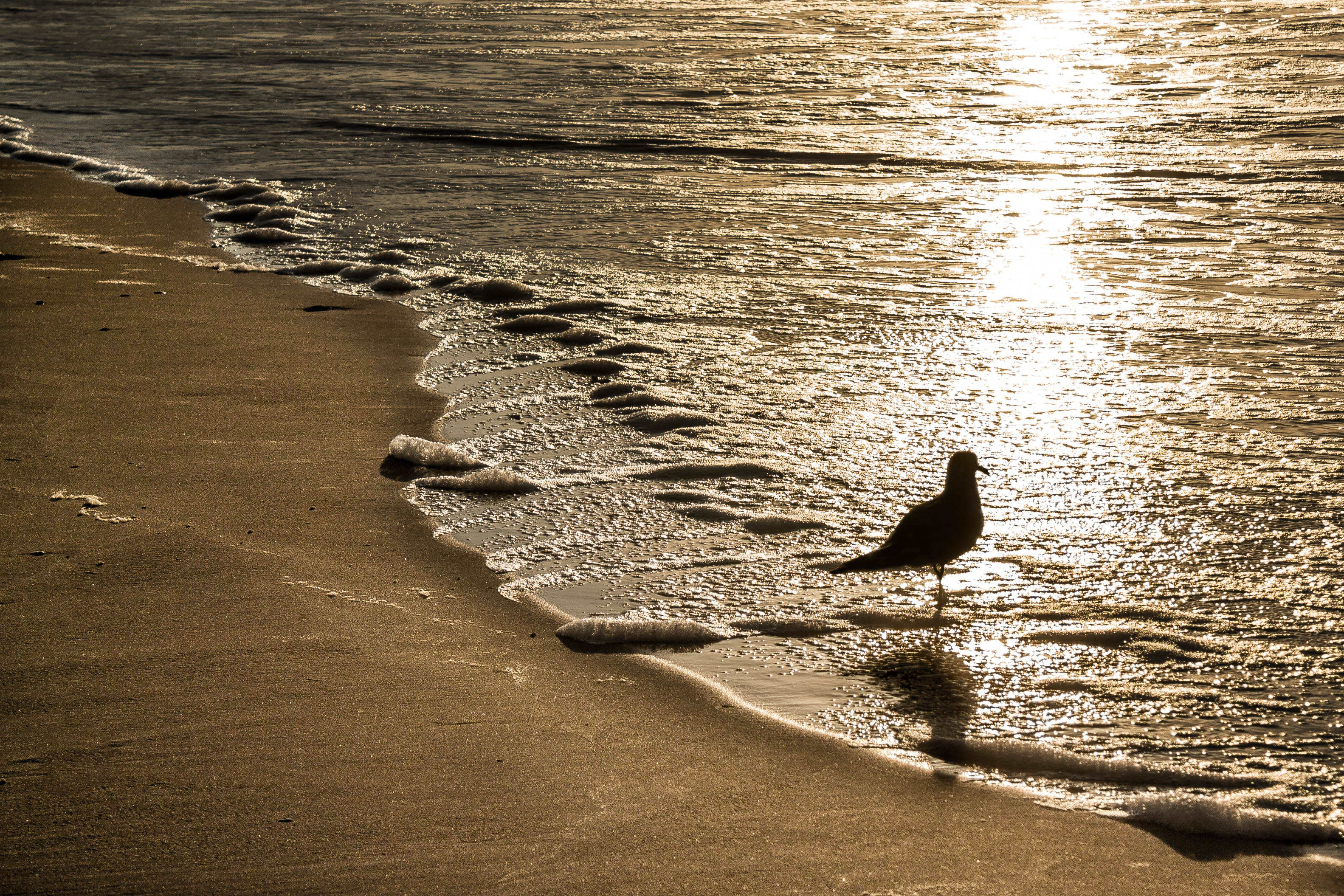 My eye for the seagulls came back with this silhouette of the gull on the water line. Other small details like seashells in the sand caught my eye. 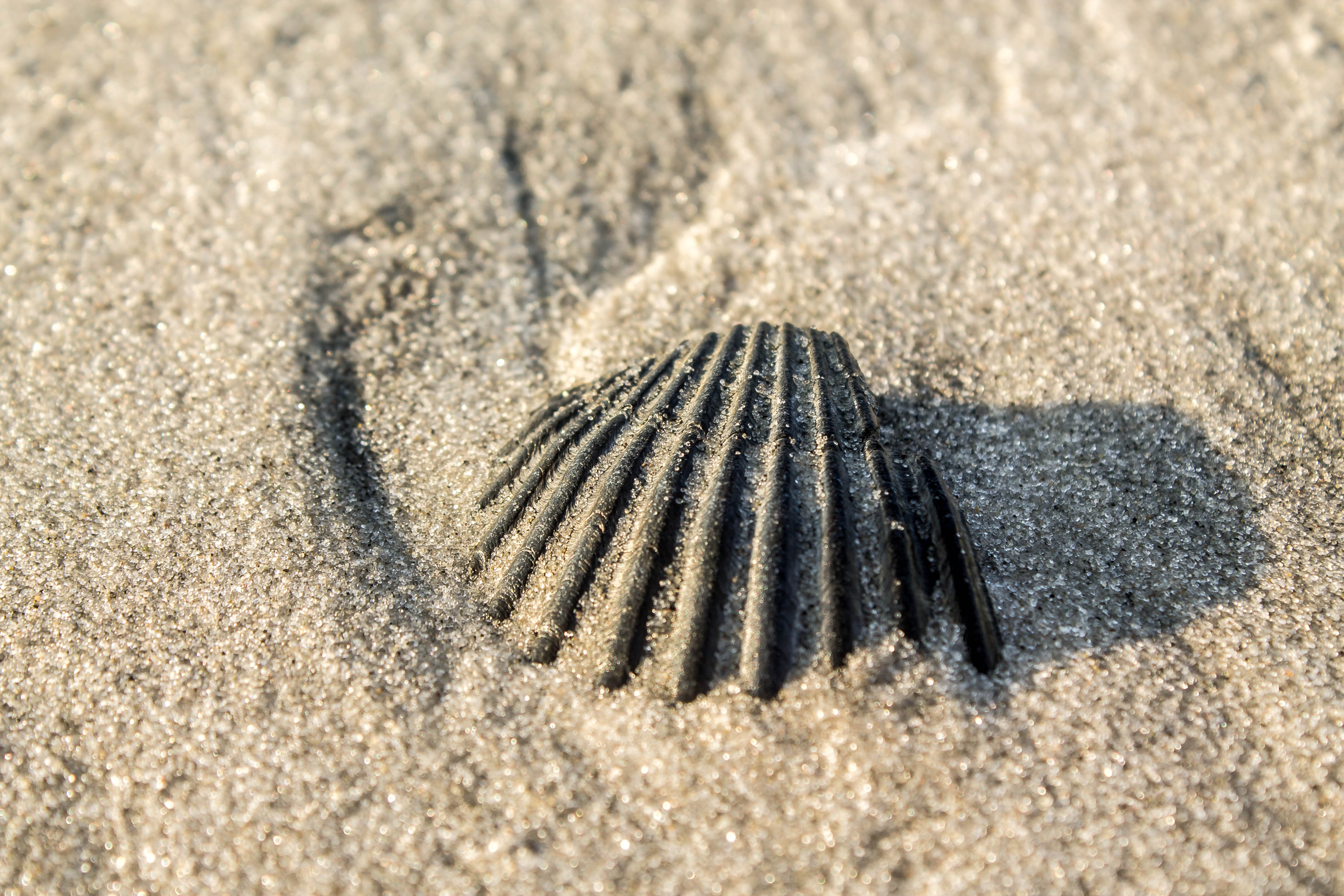 However, none of these really wowed or impressed me. But then I came across the pier which juts out over the water. With the morning sun still low on the horizon and soft enough not to blind me, I saw the sun cutting through the pillars holding up the boardwalk. This was it. This was the first moment when I found something truly extraordinary. I started taking some photos, but I had to slow down in order to really think about my approach. I went through my settings and made sure everything was where it should be. The scene was tricky because the light source was getting very bright, but there were definitive dark spots which deserve just as much detail as the light. 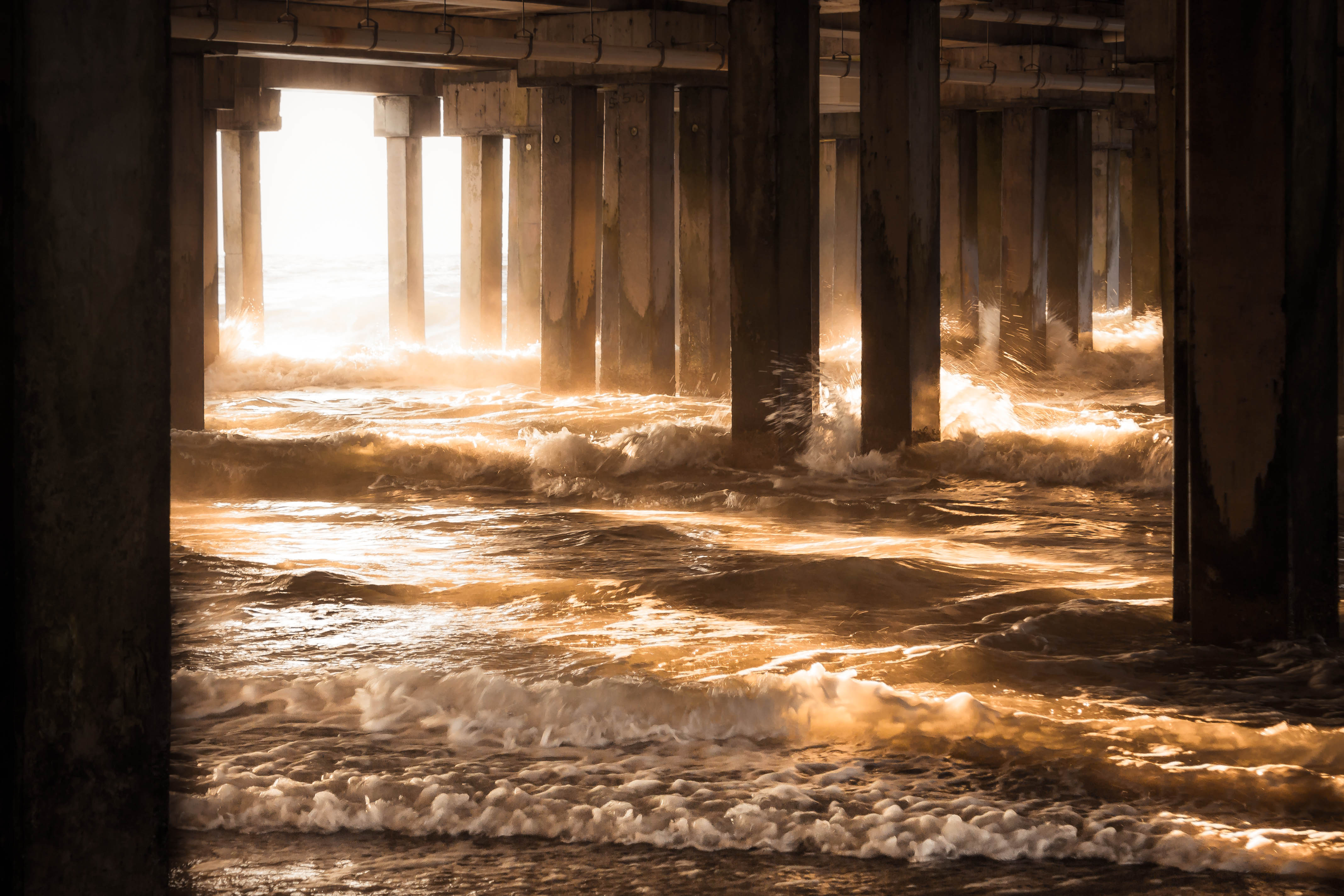 My favorite part about the image isn’t so much the sun itself peaking through the pillars, but the way the light plays with the waves crashing against the pillars and the shore itself. The colors worked as well for me as we have the golden light of the morning golden hour.  Aside from the light, I loved everything about the water, from the light to the texture to even the subtle mist floating above it.

I am sad to say that, at the time, I was not proficient enough in photography to confidently shoot this scene. I tried many different ideas and settings as I snapped away at this setting. I felt rushed since I knew the sun would only stay in this spot for a few more minutes or so before rising up too high and I would lose the direct rays of sunlight from this direction. I probably came home with about thirty different shots from this setting, all with different angles and positions rather than coming home with four or five precise and calculated shots. While I am thrilled with the outcome, I’m still weary of the mental place and approach which I had taken these under-the-boardwalk photographs. 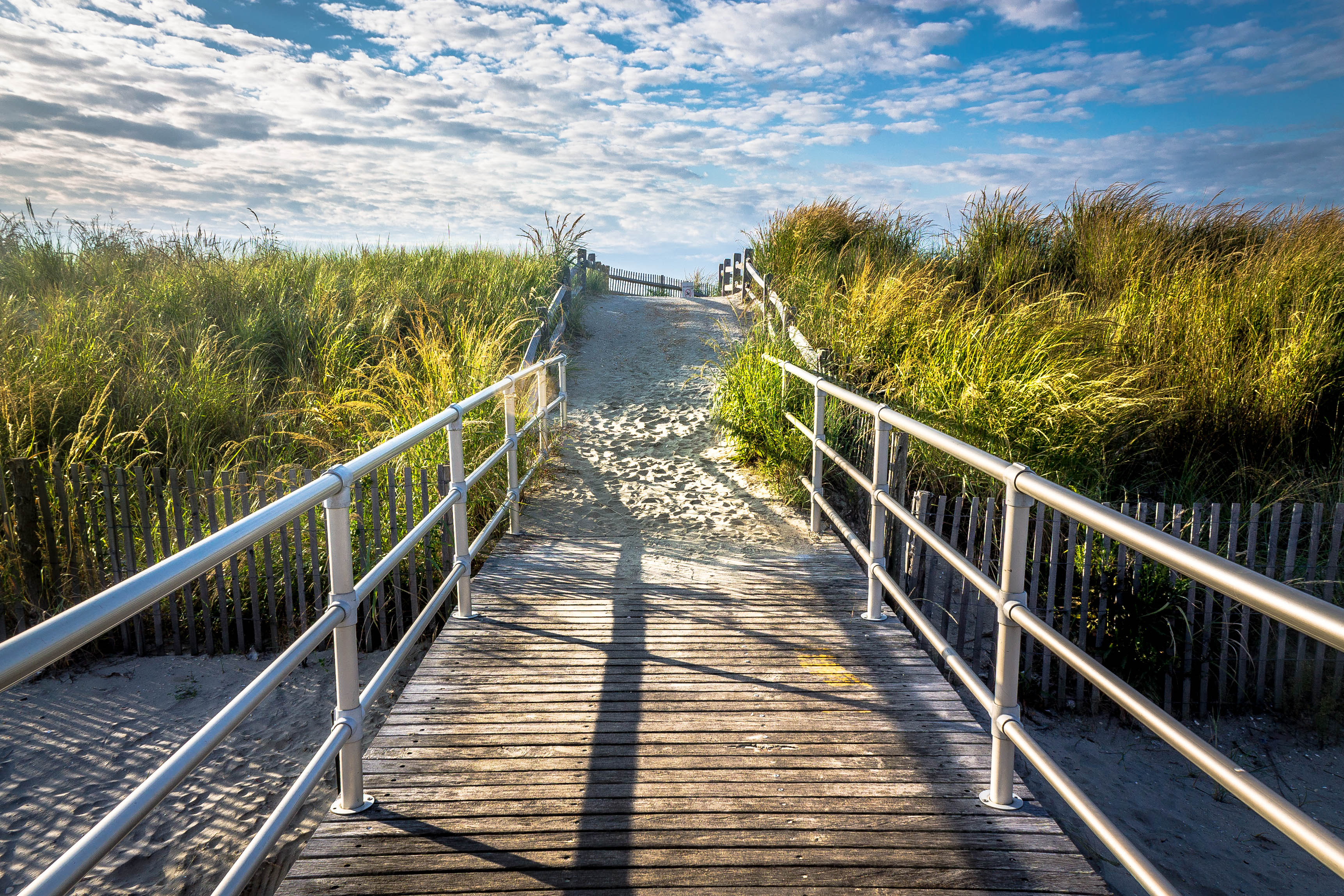 After all is said and done, I decided I got all that I wanted from the morning and I would go back up to the room to check in on my still-sleeping wife. On my walk back to the hotel along the boardwalk, I happened to notice this shot (above), so I took the camera back out and snapped this one which, to date, is still one of my favorite scenery photographs I’ve ever taken.

This photo and this whole morning experience just goes to show that inspiration can come from any place at any time – whether planned or not.